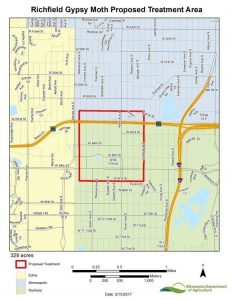 ST. PAUL, Minn. –The Minnesota Department of Agriculture (MDA) and partner organizations are planning to tackle a gypsy moth infestation in parts of Richfield and Minneapolis this spring. In anticipation of the treatment, the department is inviting people to learn about the effort at an open house to be held March 1 in Richfield.

Ranked among America’s most destructive tree pests, gypsy moth has caused millions of dollars in damage to forests as it has spread from New England to Wisconsin in recent decades. Gypsy moth caterpillars can defoliate large sections of forest. The pests are common in Wisconsin and are now establishing themselves in Minnesota.

The MDA maintains a monitoring program to watch for start-up infestations, and when an infestation is found, the department conducts aerial treatments of the infestation before it can spread. In 2016, the MDA found an infestation in the northwest corner of Richfield. The MDA implemented a quarantine of the area in November. The department is now developing a treatment plan for an affected area that runs from West 61st Street in Minneapolis on the north to West 67th Street in Richfield on the south, and Washburn Avenue South on the west to Logan Avenue South on the east. (SEE MAP) Details of the area can be found at www.mda.state.mn.us/gmtreatments.

The MDA will host an open house to share information with citizens about the threat gypsy moths pose to the environment, and how officials plan to protect the urban forest.

Over the years, the MDA has successfully treated dozens of gypsy moth infestations across eastern Minnesota from Grand Portage to the Twin Cities to Houston County. These successful treatments help postpone the full-scale invasion of gypsy moth, saving local communities and homeowners money and protecting the health of the state’s urban and natural forests.

For more information on the proposed treatments, go to www.mda.state.mn.us/gmtreatments. 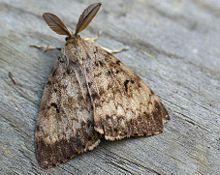